Iwate Prefecture (Kamaishi City and the town of Ohtsuchicho):
Currently based in Kamashi City and the town of Ohtsuchicho, AMDA doctors and nurses have been on rotation to provide medical services in the region. While some of AMDA doctors are stationed at the larger evacuation centers, other medical staff are delivering mobile clinic services to the smaller shelters by electric vehicles and other means. 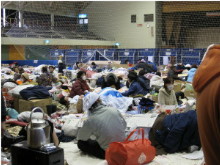 Contrary to Kamaishi City where power supply is gradually recovering, Ohtsuchicho is still facing power cut, hence the evacuation shelters continue to hold a number of evacuees.
The effort to provide meals to the evacuees was realized which served hot meals to 1,500 people in both Kamaishi City and Ohtsuchicho. The initiative was prompted by AMDA and was organized by one of the municipalities in Okayama Pref., home to AMDA. Meanwhile, relief goods sent from AMDA Headquarters arrived in Hanamaki City (AMDA’s hub for transportation of goods) in the morning of Mar. 21st and were delivered to respective sites. AMDA has also started to hire people on site at the evacuation shelters not only for the sake of fulfilling manpower but also to create job opportunities.It is believed that by hiring locals would allow AMDA to provide detailed assistance.
Miyagi Prefecture (Sendai City and the town of Minamisanriku-cho): Through Mar. 21st to 22nd AMDA team working at a nursing home in Minamisanriku-cho saw 113 patients; most of whom were older than the age of sixty and were suffering from high blood pressure, backache, oral herpes and hay fever. There were several epilepsia and schizophrenia patients as well.
From Mar. 23rd AMDA will be backing up a local doctor already active in Minamisanriku-cho to provide medical services at the local primary and secondary schools. On the same day, AMDA’s 11th team (three doctors, one nurse and one coordinator) will be arriving from Tokyo on helicopter to join the existing team in Minamisanriku-cho.
The total number of AMDA personnel dispatched thus far (as of Mar. 22nd): 56
21 doctors, 9 nurses, 2 midwives, 1 assistant nurse, 2 pharmacists, 21 coordinators