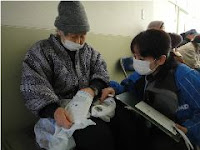 The AMDA Japan emergency relief teams who were in the region within hours of the disaster. Day by day more AMDA personnel, nurses, physicians, logisticians, counselor teams were sent to the area who fanned out into all the affected regions to provide emergency relief, shelter and support. At the same time tons of materials, supplies from all over Japan were shipped in by the truckload.

The people of Vancouver, Steveston, and Richmond BC. who, through two fundraisers partly assisted by Rose Charities Canada and AMDA Canada, as well as a general appeal contributed some $85000 to the AMDA relief efforts. These included  $10,000 from the Johrei Fellowship, Richmond, and over $19,000 from Aero Trading Co. Ltd. (aerovan@aerotrading.ca). A fundraising dinner put on by CIEAF, Stevesdon Community Center, Steveston Buddhist Temple and Kayama Enterprises Ltd, raised $35,000. A second fundraiser,  including sales of photographs donated of the Tohoku region, put on my Ms’s Mari Myiasaka and Tsuneko Ishii and sponsored by the Fraser Magazine (www.thefraser.com) raised around $15,000.

The people of Sechelt and Sunshine Coast .B.C. who, though a beautifully organized fundraiser partly by the renowned Garden Bay artist Motoko  (www.motokoart.com) raised around $15000  for both the Red Cross and AMDA relief efforts.

The UK Shiatsu groups (many) and  Shiatsu Society UK  who donated generously via Rose Charities UK to the AMDA relief effort.

To all you people who rose to assistance of the suffering of the people of the Tohoku region in Japan, we thank you. Your generosity will not be forgotten.


And to the people of Tohoku: we salute your quiet bravery and your dignity. It is almost impossible to imagine your losses, but we are with you and will remain with you in our thoughts. You are inspirational in the visage that you have shown to the world in this terrible time.