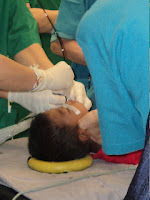 Little Tot now has a  mouth !  Surgery was completed successfully in Singapore on Tuesday 4th January 2011.  The surgery was somewhat more complicated than expected. Tots tongue was correctly formed and present though unusually small. His jaw was also locked together with ingrowing teeth from both top and bottom. However after the surgery he was able to utter a word  ‘Ba’ (which means ‘yes’ in Khmer).  The operation took 5 hours and performed by Dr Myra Elliot. Dr Veronica Ventura the main organizer for the whole Tot initiative was also present. 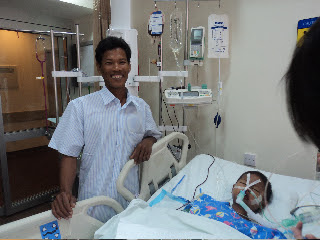 Tot will convalesce in Singapore until the 15th January then return to Cambodia and continue recovery at the First – Rose Charities Surgical and Physical Rehab Center in Takmau.

A big BRAVO ! to Dr Veronica Ventura who has been by far the main organizer of the initiative…