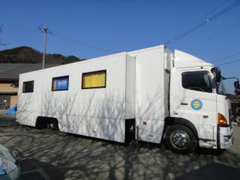 AMDA President, Dr. Shigeru Suganami held a press conference at AMDA Headquarters in Okayama, Japan on 5th April, announcing that AMDA will complete the emergency relief operations in the afflicted areas by the end of April and shift to rehabilitative assistance. The main project in the next stage will be to donate temporary-clinic units to local doctors whose clinic buildings were destroyed or washed away by the catastrophe.

AMDA has already been providing medical care after setting up a mobile-clinic trailer equipped with devices such as intravenous drip (IV) and electrocardiogram (ED). AMDA is also planning to construct two temporary clinics in Ohtsuchi-cho (Iwate Pref.) and Minamisanriku-cho (Miyagi Pref.) respectively. Setting up a temporary clinic (including various medical equipments and supplies) will cost around 10,000,000 yen (about 118,000 USD). 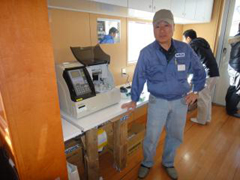 AMDA has heard that there are a number of town doctors who lost their clinics in the tsunami. Dr. Suganami appealed that there is a need of support in the form of a state-run loan offered to the local doctors in rebuilding their daily operations as soon as possible.

From now on, AMDA is going to support the rehabilitation of schools. To begin with, AMDA will give out “back-to-school” kits containing stationery and school bags.

In collaboration with foreign medical organizations, plans are also underway to establish a scholarship program for the local high school students that are aiming to become doctors/nurses in the future.