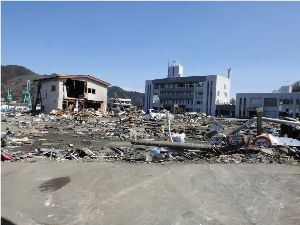 Still rattled by the frequent aftershocks, AMDA teams have been working in Iwate and Miyagi Prefectures. Now that more than 10 days have passed since the occurrence of the earthquake, obvious fatigue, both mental and physical, is present on the faces of the evacuees.
On Mar. 20th AMDA’s ninth team (two doctors) joined the teams in Iwate and Miyagi Pref. respectively.

As of Mar. 20th, the number of AMDA personnel in the aforementioned areas are as follows:

Iwate Pref.: 23
Miyagi Pref.: 9
Iwate Prefecture (Kamaishi City and the town of Ohtsuchicho):
While AMDA team in Iwate is delivering mobile clinic services to Kamaishi City and Ohtsuchicho, on Mar. 18th relief goods from AMDA donors arrived in Iwate to be delivered to each evacuation centers.
Introduced by one of AMDA doctors working in Ohtsuchicho, a medical team from Nagasaki University School of Medicine joined forces with AMDA team. 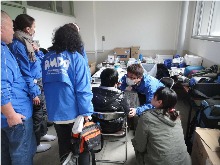 Upon the arrival of newly-dispatched personnel, AMDA has been replacing its doctors time to time as those sent earlier had been exhausted. The donated-electronic vehicles arrived from Okayama on Mar. 19th and are now used for mobile clinic services; the vehicles are able to complement the gas shortage. 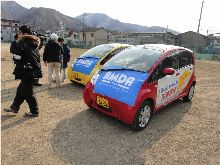 As more and more activity locations are added in Iwate Pref., AMDA sent its 10th team on Mar. 21st by land. 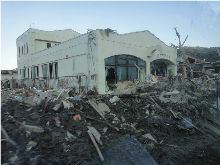 Miyagi Prefecture (Sendai City and the town of Minamisanriku-cho):
On Mar. 19th AMDA team in Sendai moved to Minamisanriku-cho by land. At the local disaster headquarters set in Minamisanriku-cho Bay Side Arena, the team provided orthopedic treatments and provided medicine to 100-some patients. A number of patients with chronic diseases such as high blood pressure and diabetes were seen. On Mar. 20th, beside treating patients, AMDA team provided comprehensive support ranging from setting up examination rooms, improving toilets for patient-use, guiding visitors and developing a map of the facility. The team returned to Sendai after providing necessary services in the facility.
Meanwhile, another group of AMDA personnel arrived in Minamisanriku-cho (by helicopter) and reached another emergency center established in the local athletic ground (Minamisanriku-cho Sports Exchange Villa Athletic Ground.) They joined the earlier team to work in the local daycare center (evacuation shelter.) The team is later scheduled to work at a local elementary school where currently 650 people have been evacuated.
As there is a growing demand for AMDA to work long-term in Minamisanriku-cho, a plan is underway to send 11th team on Mar. 23rd from Tokyo by helicopter.
Stay tuned for more updates.